We recently posted a paper on the arXiv entitled "Stabilizer Slicing: Coherent Error Cancellations in LDPC Codes" in which we discuss a technique for applying stabilizers in a quantum error correcting code to minimize additional errors introduced into the system. The coherent errors we consider are small but consistent overrotations which rapidly become damaging with repeated application. These errors are considered to be a major concern in many quantum architectures, including ion traps. Our technique takes advantage of the coherence present in these errors by applying stabilizers through two evenly weighted rotations pointing in opposite directions. In doing so, coherent overrotations cancel out when applied to states in the logical subspace of the code.

When considering a simplified error model we can completely eliminate coherent error in Surface-17 given access to 3-body gates, and for noise of 0.99 unitarity we achieve a 135-fold improvement in logical error rate. With only 2-body ion trap gates we observe a 89-fold improvement in Bacon-Shor-13, which should be testable in the near future. As an aside, this last example takes advantage of the prepared gauge degrees of freedom, and  to our knowledge is the first example in which the state of the gauge directly affects the robustness of a code's memory.

(Bottom) Logical error rates for Surface-17, comparing a standard implementation to one which is stabilizer sliced. In this plot two and three-qubit gate infidelities are 0.001. 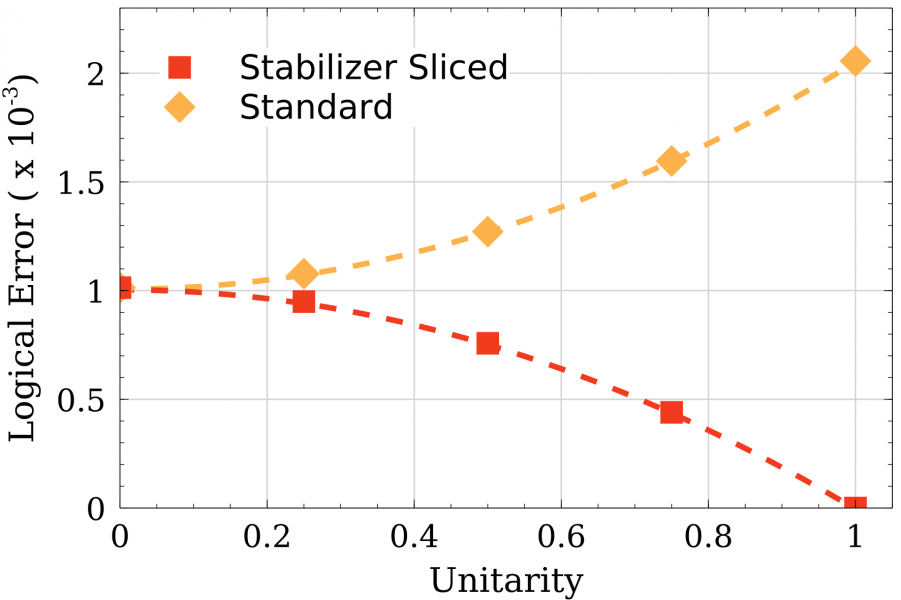